Sitges Next 2021 Presents an Innovative Campaign, Fusing Date and Art

The pieces were designed by Camil Roca and Zoopa Agency

The Sitges Next campaign -headed by Camil Roca and conceived and developed by the creative agency Zoopa- reflects the Festival’s spirit as a platform and meeting point for innovation in communication. It is a piece that combines data and art, following the vision that communication must be memorable and leave its mark.

The campaign is a graphic concept that incorporates movement over a static background. The way the piece is seen changes depending on the viewer in an example of intelligent communication. The graphics, with several adaptations based on user data, gets the most out of technology adapted to creativity.

Behind this initiative is the renowned publicist Camil Roca and one of the most innovative agencies on the current scene: Zoopa. Camil Roca has been executive creative director at Ogilvy in Barcelona for 12 years and presently leads the K1000 consulting firm, a collaborative communication project involving different agencies and production companies. His resumé features campaigns for Danone, La Marató, Nescafe, Allianz, Pepsi or Disneyworld and an extensive list of brands, as well as 150 awards at international festivals, including five Cannes Lions and a new Eficacia.

Meanwhile, Zoopa Agency, created in 2006, is an agency that is well-known for its innovation and ability to adapt to new narrative languages and communication channels. It specializes in the field of branded content and has worked for numerous phenomenally successful campaigns, which include PortAventura, PGA, Playstation, imagin, Bacardi, Rakuten / FCB, Martini, Danone, Dior, and Tag Heuer.

The Sitges Next Festival will be held on November 11th and 12th, with a line-up featuring big names like Toni Segarra, Josep Maria Piera, Eva Santos, and Pancho Cassis, among a long list of others. The complete line-up will be finalized on Wednesday 20th. 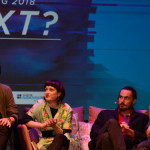